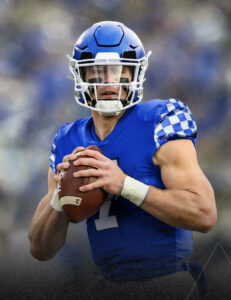 Will Levis joins the Kentucky Wildcats with an exceptional resume both on and off the field. Graduating Magna-Cum Laude from Penn State with a Finance degree in three years, Levis entered the transfer portal in 2021 with an additional three years of eligibility. Seeking to expand their already impressive offensive line-up, under the guidance of offensive coordinator Liam Coen, Levis was signed for the 2021 season to lead the charge.

During his time at Penn State, Will notched 473 career rushing yards including 108 yards against Rutgers, the 10th most in Nittany Lion history. During his 2020 Redshirt Sophomore season Will appeared in eight games throwing 33 – 55 for 421 yards.

The Levis academic and athletic heritage spans several generations with Will’s All-American great grandfather Alva Kelley participating on the 1939 National Championship football team at Cornell University followed up by an impressive coaching career throughout the Ivy League circuit. Will’s grandfather Dave Kelley was a 3-sport athlete at UMass while his mother Beth was named a two-time All-American soccer player at Yale while his father Mike also took to the gridiron at Denison University. 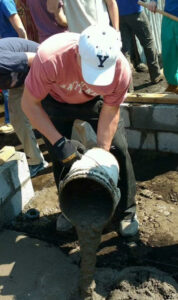 Off the field, commitment, character, and education take center stage with Will boasting an impressive resume starting well before college. While attending Xavier High School in Connecticut Will won the prestigious Brother Celestine Academic Award while also being named to the National Honor Society and becoming a Ryken Scholar. Will also took home the Fairfield Book Award. While attending Penn State  Will was name the Offensive Scout Player of the year as a red shirt freshman. He also earned the team’s High Academic Average Award during both his freshman and sophomore years. Will took home Academic All-Big Ten honors all three years.

In 2017 Will participated in a service trip to Guatemala building homes and working with the local residents. He has been an active volunteer with food pantries in and around his home state and is now seeking to volunteer with the Lexington Leadership Foundation partnering with at-risk youth within the heart of Fayette County.

Watch Will Levis interview regarding his background and transfer to Kentucky